By LuAlexandra October 15, 2016
My two Budgies Fergie & Holly are going to be the subject of this blog as I thought it would be nice to talk about a happier topic. I'll start by giving you a little information about them. Fergie is my oldest bird, she's 2 & a half years old & I got her from a pet shop at only 2 months of age. With her beautiful sky blue & white colouring, she looks nothing less than perfect. She really is a unique looking bird. Holly is just as adorable with her pretty green & yellow feathers, and her unusual white spots on each cheek. She's only 8 months old & has been with us since she was just 6 weeks! My nephews named Fergie after Alex Ferguson, as we originally thought she was a boy! But now I have to tell people she's called after Fergie from Black Eyed Peas. Haha. Believe it or not, I actually made the same mistake with Holly, I called her Olly because I thought she was a male, until a breeder corrected me. Obviously I then changed her name to Holly. Both birds are clear wing spangles, meaning they have no dark markings. Now I've got that out of the way, I talk about that they are like..

In my opinion, having pet budgies is nothing but a pleasurable experience, especially if you are someone who likes company, because unless its their bedtime, there is never a quiet moment. With their amusing ways & delightful chatter, they brighten up my everyday. their fascinating antics are enough to entertain anyone, Fergie's all time favourite trick is lifting her cage door up with her beak, then letting it drop so it bounces down with an almighty thud! She only does this for attention if no one has been to check on her for a while. She definitely knows what to do to get noticed, she wouldn't let you ignore her even if you wanted to! Lol. Holly hasn't quite mastered the art of such tricks yet but with Fergie as her influence I'm sure it wont be long before she's up to the same things. She's a little quieter than Fergie, she twitters along all day but her tone is much lower, but she is a bit more playful than Fergie, I often walk in to find her hanging upside down from the top of the cage! Haha, Fergie on the other hand, prefers to stand tall & proud on her perch and show off her whistling skills as if she's performing on stage! Where-ever you are in the house, you can always hear her cheerful chirping which I find rather uplifting, but I'm sure you'd find it a tad annoying if you aren't keen on birds.
One of the best things about them is their obedience & willingness to do as they're told, for example, they know that they haven't to start their day until someone has taken their cover off in a morning & put the radio on in their room. If I do this at 8am, they will start chirping, if I don't do it until 11am they wont move or make a single sound! That's what you call well behaved budgies! Another thing I love about them is the bond they share between them, one day never passes by without me catching them rubbing beaks & snuggling. Cuties! I also should mention that Fergie seems to have a super special bond with my Mum, which is strange considering she wasn't as keen on birds as I am lol. Fergie being Fergie, must have picked up on this & decided to set herself the challenge of trying to win my Mum over by making a special effort with her, and would you believe it, it worked!! She now loves Fergie (and Holly) just as much as I do! Good Work Fergie Birdy..!! To finish off this blog I've included a photo of my birds sharing a cuddle, which is just one of the many beautiful photos I have of them. x x 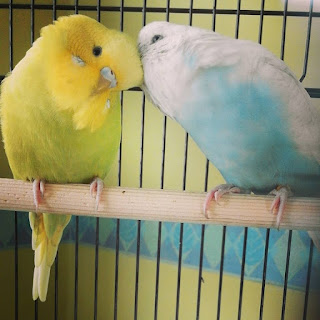 By LuAlexandra September 01, 2021
I'm just gonna start by being really honest with you all. This year has been rough for me. Really rough. My Marfan related health problems have taken their toll on me and I feel physically exhausted. I feel emotionally exhausted too, but I don't like openly admitting that. I don't know why, I guess it makes me feel ashamed as I sound weak. I don't want sympathy, I just want to express myself. If you've followed me for a while, then you'll know that I already have various medical ailments mostly as a result of Marfan syndrome. I live with chronic pain, PoTs, a complete bowel prolapse, and numerous other problematic issues. I was just about managing to cope with all that but then Marfan syndrome started affecting my gastrointestinal system, and I've lost too much weight. I've been slim for a few years now, but not this slim. I'm just about sitting at 6st at the moment, which is far too thin for my height. I've been referred to the dieteics team and
Post a Comment
Read more

By LuAlexandra June 02, 2021
Written in response to the unwelcome yet frequently made remarks on her strikingly slender physique, Lucy’s piece will resonate with many Marfan folk whose slim stature is also the recipient of such unwarranted attention.   Hey guys, here's a blog written by me, published by Marfan Trust. The Critique of my Marfan Physique.    https://www.marfantrust.org/articles/201-the-critique-of-my-marfan-physique https://www.marfantrust.org/articles/201-the-critique-of-my-marfan-physique
Post a Comment
Read more