How I feel About Marfan Syndrome...

November 05, 2016
I said last time that I wanted to discuss Marfan syndrome in my next blog so I should start by explaining what that actually is. Marfan syndrome is a rare connective tissue disease that only effects 1 in every 5,000 people. In most cases, it's passed on through inheritance, meaning it runs in the family, but a very small number of people have got it spontaneously, this is called a spontaneous mutation & means there's no family link, strangely, I happen to be in that category and I was diagnosed after suffering many health problems throughout my childhood. at the age of 13 I developed scoliosis (a curved spine) and needed major surgery to correct it, which then led to further investigations & that's how my Marfan diagnosis was discovered, although it wasn't quite as quick & easy as that, it took the doctors a few years to finally put a name to all my troubles. Marfan syndrome had a lot to answer for!

Being told as a teenage that I had a rare & serious syndrome that only affects a small number of people was hard news to take, I realise now that I dealt with it badly at the time by refusing to talk about it. I didn't want anyone to know & that was because I thought it was easier to ignore that way. I pretended I wasn't bothered by the news but secretly I was kept awake at night by the doctors words. I clearly remember sitting in the doctors room with my Mum as she explained what the syndrome meant, she told me it was life threatening & said I'd need to go for all sorts of other tests, as if I'd not already had enough after all the examinations before my surgery! I left the clinic that day feeling abnormal for having yet another illness that no one else could relate to. I felt angry & shocked, angry at life for singling me out once again, and shocked that all my problems where the result of something so serious.

As the years have passed I've accepted what's wrong with me & I deal with it better now, partly due to the fact that I speak to other Marfan's online who are in very similar circumstances, and partly due to the fact that everything became harder to ignore when my symptoms worsened.My mobility has deteriorated quite a bit lately & I can't walk far without needing to stop due to aches/pains & tiredness. This is because my joints/muscles are weaker than normal so my body gets tired easily. I suffer with widespread pain everyday though weather I am walking or not. Then there's the problems with my back caused by loose & protruding screws but I'll save that for another time.

My family are very supportive & understanding but I don't think they know that I often feel isolated, it's hard not to feel like a small fish in a very big pond when nobody around you can relate to your unusual health problems. A few people might know the names of my illnesses such as Marfan syndrome/Hypermobility, but hardly any of them actually know what that means, which makes it harder to talk about if I ever want to. The photo I've added is a card that I carry around with me now, just in case I'm ever in a position where I need to explain my health troubles. It sums things up perfectly. 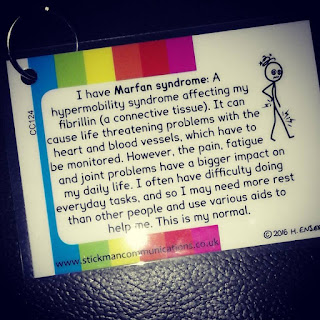 I think that's it for now. I hope my ramblings haven't bored you too much... X

September 01, 2021
I'm just gonna start by being really honest with you all. This year has been rough for me. Really rough. My Marfan related health problems have taken their toll on me and I feel physically exhausted. I feel emotionally exhausted too, but I don't like openly admitting that. I don't know why, I guess it makes me feel ashamed as I sound weak. I don't want sympathy, I just want to express myself. If you've followed me for a while, then you'll know that I already have various medical ailments mostly as a result of Marfan syndrome. I live with chronic pain, PoTs, a complete bowel prolapse, and numerous other problematic issues. I was just about managing to cope with all that but then Marfan syndrome started affecting my gastrointestinal system, and I've lost too much weight. I've been slim for a few years now, but not this slim. I'm just about sitting at 6st at the moment, which is far too thin for my height. I've been referred to the dieteics team and
Post a Comment
Read more

September 13, 2020
Over the last few years, I've been very open on Blogger about my life with Marfan syndrome and numerous health conditions, but I haven't been quite as forthcoming with those around me because if I'm to be honest, I struggle to fully express the significant impact that chronic illness/health conditions have on my day to day life. I don't look like someone with chronic illnesses. I don't use a wheelchair, a stick or any disability aids, so I'm afraid of telling some people in case they think I'm over dramatising it. But that is far from the truth. I've lived with chronic pain for a long time now, gradually building up and becoming more widespread over the years. I've learnt to become good at pushing my unpleasant physical sensations aside to get on with my every day life though, so no one would ever guess it. No one would know (unless you are my Mother) that on a typical day I experience several different types of pain and discomfort throughout my body
Post a Comment
Read more

March 03, 2022
Last month it was Marfan syndrome Awareness Month & I was asked by Marfan Trust to write a short blog about why I think more awareness needs to be raised amongst medical professionals. I've written a little bit about myself & my own experiences. I could've gone on forever about why I think awareness is so vitally important, but I tried to keep it quite brief, as I'm sure you'll all have your own reasons for why you think more awareness needs to be raised. If you'd like to share them with me, don't be afraid to get in touch. Thanks everyone, you'll find a link to my article right here. 💓 https://www.marfantrust.org/articles/lucy-and-doctors?fbclid=IwAR0mI483m5jH-OQ0Y1feqEnRRIlhJgTLtFZ-6ekl7WRHVtWQL-a6QrGHXuY
Post a Comment
Read more