I'm just gonna start by being really honest with you all. This year has been rough for me. Really rough. My Marfan related health problems have taken their toll on me and I feel physically exhausted. I feel emotionally exhausted too, but I don't like openly admitting that. I don't know why, I guess it makes me feel ashamed as I sound weak. I don't want sympathy, I just want to express myself. If you've followed me for a while, then you'll know that I already have various medical ailments mostly as a result of Marfan syndrome. I live with chronic pain, PoTs, a complete bowel prolapse, and numerous other problematic issues. I was just about managing to cope with all that but then Marfan syndrome started affecting my gastrointestinal system, and I've lost too much weight. I've been slim for a few years now, but not this slim. I'm just about sitting at 6st at the moment, which is far too thin for my height. I've been referred to the dieteics team and they've put a care plan together for me. However, in the meantime, I'm waiting to see a gastroenterologist to discuss the nasty gastrointestinal symptoms I've been suffering with this year. I haven't been able to tolerate food as well as I used to. I mean, I can eat, but it causes so much nausea and bloating after just a few mouthfuls. It makes me feel quite unwell because I constantly feel like my food isn't digesting and is just sticking to the inside of my chest. I rarely get through a full meal these days without having to stop half way through to let it digest. Afterwards, I tend to feel extremely sick and bloated to the point of not being able to eat anything else for the rest of the day. Which is a bit of a nightmare when you've been ordered to increase your calorie intake, but there's little chance of that happening with these unpleasant gastrointestinal symptoms going on every day.

Although people with Marfan syndrome are typically quite slim- It shouldn't have led to such a drastic drop in weight. So although I beleive Marfan syndrome is partly responsible, I also know there could be a number of causes- Relating to Marfan in some way, no doubt. I've resorted to doing my own research again this year (Something you get used to when you have a rare health condition) and it seems gastrointestinal manifestations are quite commonly found in people with connective-tissue disorders. However, it still needs investigating, as the dietician suspects I may have a gastric problem that needs treating. But the NHS are still under immense pressure with Covid, and it looks like I have a long wait ahead. My GP is currently trying to speed up the appointment, but the back-log is huge. I know it can't be helped, but I really feel like no one in the healthcare system cares at the moment. I honestly feel like I'm battling all this alone, and that's not a nice feeling when you have chronic health conditions. I'm sick of constantly having to advocate for myself and my needs when I'm not well. I weigh less than some children. I can't digest food very well. I have Marfan syndrome and a combination of symptoms to go with it. Plus other unrelated health problems, yet I've had to call my Doctor back each week to discuss my issues as they haven't been dealing with it very well. Nobody wants to listen, help, or understand at the moment.

I won't lie, I've struggled a lot this year. Not just with my health, but mentally too as all this has been getting me down and making me feel overwhelmed. It sometimes seems like my Doctors don't grasp the enormity of life with multiple medical problems. They expect us to just deal with it on our own with no professional support. It's a little disheartening that there's no one for people in my situation to turn to when we're going through a particularly tough time with our health. I spend large parts of my day resting due to on-going back and joint problems, and lately I've spent more time feeling sick than usual. But I'll cope and get by in the same way as I always do, because in the end, what other choice is there? 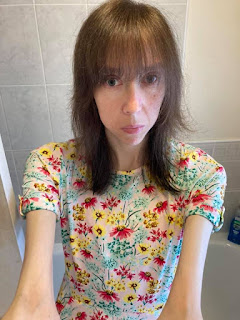 By LuAlexandra September 25, 2020
It's almost a decade now since my disastrous dental problems began. I was still a teenager & suffering relentlessly with toothache and painfully sore gums. I consulted my Dentist numerous times regarding this miserable matter but he couldn't pinpoint an actual cause. He said my gums were severely inflamed and my teeth were very sensitive. That was the best answer he could provide me with. The annoying thing was that it couldn't be treated as there was little that could be done for sensitivity & inflammation. so I was just advised to keep my oral hygiene as healthy as possible, and avoid eating anything that triggered it off. I didn't understand why this was happening though as I wasn't someone who lived off sugary snacks, so as a rule, my teeth & gums should not have been so inflamed and sore. I mean, I liked a chocolate bar and a cake as much as anybody else, but I wasn't consuming enough to cause so much dental distress. It became an on-going issue
Post a Comment
Read more